For me, Kusu is all about corals. It is one of the few shores in Singapore (the others being Tanah Merah and Sentosa) which boasts of densely packed coral gardens. For a great overview of how dense the coral growth is, check out the photos on James' blog here . It is hard to imagine that such "coral gardens" remain in urbanised Singapore which is a mere 20 minute boat ride away.

Unfortunately, these "coral gardens" at Kusu which are located outside the sea wall only reveal themselves at the lowest tide. This was not the case during our visit last year, but fortunately for us, we were blessed with a fairly low tide this year. Incidentally, this is also the only area (be it terumbu or natural shore) with the highest concentration of Heteractis magnifica. Large clumps of this anemone could be found clinging onto large rocks and coral rubble. However, no clownfish or anemone shrimp were sighted amongst these anemones. They appeared to prefer the Stichodactyla gigantea and some of the ones I saw had orange body columns. Strangely, the largest giganteas are to be found within the lagoon areas and not outside the sea wall. I also managed to see one Heteractis crispa but no sightings of Stichodactyla haddoni (Haddon's carpet anemone) or Actinodendron (Fire Anemone).

A first for me on this trip were sightings of the elusive Saron shrimp. In fact, they were hardly elusive on this shore as they were all over the place, some of which were fairly large. There were a couple of interesting fish, including a fairly large nervous seabass like fish (possible escapee from the nearby farm at St John's?). However, the trouble with Kusu is the silty conditions which makes the water murky and non-conducive for photography. 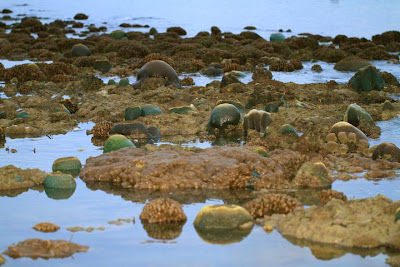 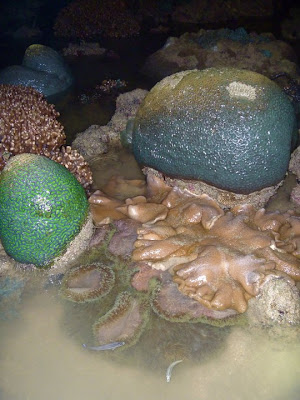 I am a self-professed naturalist. Having grown up as a single child, much of my childhood was spent, amongst domesticated animals; dogs, cats, rabbits, various rodents, fish, amphibians, birds, tortoises and even snakes. It was only much later that I developed a penchant and interest for plants and the more exotic wildlife. Observation soon turned into obsession and now, conservation, which probably explains why I have created both this blog and a sister plant blog, Journey Through Paradise .
This blog is a platform from which to share my experiences and to document the wildlife I see from my field trips to the remote and forgotten parts of Singapore (and sometimes abroad) in search for both common and elusive creatures. More importantly, I hope to create awareness amongst fellow Singaporeans about the rich biodiversity and to dispel the notion that Singapore is devoid of any wildlife. It's there, you just have to open your eyes and know where to look.